I’m a quitter. I used financial independence to opt out. In October 2020, I quit my marketing career to retire at 30. I’m a black woman and after starting my first marketing job at an ad agency in 2011, it became instantly clear that the sexist and racist world of Mad Men is actually not completely in the past.

During my 9 year career, I was almost always the only person of the color in the room and at times, I was the only woman. Marketing does have more women than men in the field, but almost all of the leadership positions are held by men. And if a woman is in a position of leadership, she is almost always white.

Anecdotally, during my career, I worked at 6 different companies of various sizes and specialties across Manhattan and Seattle and I never saw or met any person of color who was in a leadership position. In fact, usually the only other people of color I saw during the workday were the doormen or janitors.

Step Into My Time Machine

So it’s probably no surprise that an industry with these types of demographics is not exactly a beacon of equality and diversity awareness. At times, I really did feel like I had been transported into the 1960s scenes Mad Men was based on.

As a woman, I was held to a different standard than my male colleagues. I was pulled aside one morning by my (male) boss, and told that I needed to dress better if I wanted to advance in the company. The irony is that we were dressed almost identically. He was wearing a t-shirt and cargo shorts. When I pointed this out he said that he was just giving me advice….thanks I guess.

I didn’t completely realize this double standard at the time and actually did take his advice. I started wearing dress shoes, fancy tops and blazers while he continued rocking his casual clothing. I then took the rubric we were given for promotions and made sure that I would hit all of the requirements needed to get to the next level – and I hit them all.

But when promotions came around, I watched as men who started at the same time I did and had the same level of experience were promoted while I was not. And strangely, some of these men actually didn’t even do their current job well. For example, I was invited to almost weekly calls where I had to explain to vendors why one man’s projects in particular were always behind.

I didn’t realize at the time, but this experience was not just mine. It was a microcosm of a system that does not allow women to advance in the same way men do. As my career went on, it also became clear how the color of my skin was also being used against me.

Anyway, during my last year at the company, multiple (white) colleagues decided to do the classic example of a microaggression against a black woman and grab my hair. It’s a bit of a saga how each incident happened and I talked about it in detail here if you’re interested, but I want to talk about the outcome of these incidents.

My company hired another black woman recently and she also experienced this type of microaggression – but by the founder of the company in public, in front of our entire company. We discussed it and she raised the issue with the leadership of our company. They promised to take her words seriously and said they would look into introducing diversity training.

Meanwhile, a day later I found myself at a work gathering only to have a member of that very same leadership team grab my hair. I was standing there, felt a tug and turned to see her with my hair in her hands. Obviously, they were not actually taking my colleague’s concerns seriously.

So at that moment I felt like I had two options: To continue bringing up the issue and fighting for the same level of respect that my white colleagues were given (aka don’t touch people!), or to give up on my company. I decided to give up and I felt guilty about it.

I felt like I should want to fight for social justice and pave the way for other marginalized people who might be hired at that company after I was gone. I thought that I should want to try and make it a better place for them, but when I thought about what I wanted and needed – that wasn’t the path I wanted to take and that made me really sad to realize.

My feelings overall were better expressed in this quote I read:

“Worn down by microaggressions. Held to a different professional standard. Contributions ignored. Tired from having to represent an entire demographic. Lonely.”

That’s exactly how I felt. All my life I have been in the minority as a person of color and at times as a woman. I have always felt the pressure to represent my race and to an extent my gender. To be the absolute best, to fight all stereotypes and to lead by example, but after almost a decade of this, I had to admit to myself that I was just tired. I was tired of feeling like I had to represent an entire race of people or an entire gender.

So I gave up. I used the financial foundations I had laid years earlier to opt out of the racist and sexist parts of corporate america. I did my best to bring people with me in this endeavor by being open with my friends, family and colleagues about how I was taking these steps in case they were interested in taking any of the steps themselves. If they weren’t, that was cool too, but I wanted them to know that it was an option.

I shared my salary with my colleagues and helped them fight for the money they were owed. I helped several of them invest for the first time and made sure they were contributing to our company 401(k) – all at their request of course.

I took a separate path and found a way that I might be able to make an impact on the world besides fighting tooth and nail to make this one company a little better for people of color and women. Instead of feeling like I’m single-handedly fighting against microaggressions, the wage gap and all the other ways women and people of color have to fight harder to arrive at the same destination, I did what I could to prepare others financially to opt out as I did.

Now, months after that agonizing decision, I’ve learned that it was the right one. My old company has been sold to a larger one that holds diversity even less dear than my company. I could have fought hard and done extra unpaid work that they requested (I was asked if I wanted to ‘volunteer’ to be on a diversity committee before I left – I declined). But even if I had somehow made that company a little better for the women and POC that came after me…that company no longer exists. My efforts would have been for naught.

All this to say, if you are tired of fighting, I believe that deciding to opt out is a valid decision. Laying down the financial foundations to be able to leave a trying environment or one where it’s clear you will not be advancing through no fault of your own is one of the best things about financial independence. Take care of yourself and your future. 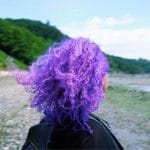 “Purple” from APurpleLife.com retired at 30 in 2020. She started writing about her journey to financial independence in 2015 and was able achieve her goal quickly by increasing her income through job hopping and decreasing her spending with domestic geo-arbitrage. She’s currently living a nomadic life and enjoying hobbies such as birding, stargazing and writing.