We often hear stories about how people scrimp and save to reach financial independence and dig out of debt. Work hard, save, and you’re on your way, right? For most, we think of an emergency fund as a fallback in case of a health emergency, job loss, etc. However, the reality is much more complex for most people.

It’s no surprise that many of the dazzling stories we hear in the FIRE community are about people who far exceed the odds. There’s a lot more at play here than we think of. Many start off with little or no debt, others have assistance from family members in ways that we can’t quite define. Unquantifiable privileges put the starting blocks at slightly different places on the course of all of us. Certainly, most haven’t had to support their own parents while they are still considered to be working age.

However, for many people, especially those who don’t come from families who have already started to amass some wealth, their personal journies are rarely completely independent of the extended family’s situation.

Today, Mackenzie gives us a great view into how her own journey to financial independence has been impacted by the struggles the pandemic has created for so many individuals. It also reminds us how important it is to think about how your money, and even your emergency fund, might be put to use when needed for those outside your immediate household.

A good many of us have been the catalyst for financial change within our families. That also means that sometimes we are the ones that have to intervene in not-so-great financial situations. My first time experiencing this happened last year because of the pandemic. Once my state closed nonessential businesses, it suddenly became apparent that I would have to step up for my dad financially, even though I was only making $15 an hour.

The Perfect Storm of Age Discrimination, Too Much Experience and Covid

My dad quit a very toxic job in the tech industry in September of 2019. While it was great on paper, it was killing him mentally. After a brief decompression phase, he started driving for Uber and Lyft to earn some money while figuring out what he wanted to do next. After a few months, he got a job offer from an online sports betting app for their cybersecurity department.

We all know what happened in March 2020.

Social safety nets like PPP, PUA, and unemployment were all denied.

Because of his age and experience, jobs saw him as too old or having too much experience, aka he was out of their budgets even if he was fine working for less than I was making.

When the job opportunities started looking slimmer, I had to start helping financially because UberEats only offered so much financially. With my income, the type of help I could offer was small—things like covering Dad’s phone bill or giving him $20 or $30 for gas. I would buy extra items. I went grocery shopping and dropped them off at his place. More than once, I brought over an “I accidentally made extra” meal under the guise of not wanting to waste food, but really I made extra, so I knew he was eating. The small things add up. I was easily spending an additional $100 a week just on extra groceries and gas so he could eat and continue driving for UberEats.

The pandemic spurred a lot of people to reconnect with family. I mean, we all might die. We might want to mend some bridges while we can.

My dad reached out to his father after 15 years of not speaking. My grandfather was absent most of my dad’s life, and when he was around, it wasn’t great. With the looming pandemic, both approached reconnection intending to make amends. We also learned that my grandfather had transitioned the year before. It really did rain in my dad’s situation, and then, holy shit did it pour.

My grandmother ultimately moved to Vegas to help my dad. It was a move to try and make up for past mistakes as a parent, and she only understood how to do that financially. It also meant I could shift back to sending extra money to my emergency fund because I recognized there might come a time he would need more help than I had been giving. Thank god I did because, boy, did my intuition call that one.

After about four months, my grandmother convinced my dad to move into a bigger, and therefore more expensive apartment. That is around the time things stopped looking like they were headed in the right direction.

Not three months into their new lease (Thanksgiving week, to be precise), my grandmother abruptly moved out. A discussion over abortion rights led to her declaring she “couldn’t be associated with baby murderers.” Yup. Her exact words. She was out of the apartment a week later, leaving my dad with a bigger monthly overhead.

To keep bills paid, he needed to make about $3,000 a month. That minimum monthly amount covered rent, internet, electricity, his car payment, and car insurance. I covered his phone, food, gas (every so often), and small miscellaneous things.

He leaned into food delivery apps hard during this time. His goal every day was about $150, $100 for expenses, and $50 to cover what he was using in gas every day. It may seem easy enough, but in a city that hovered between the number one and two spots for unemployment in the country, food delivery was saturated with people needing to do the same. My dad ended up having to drive 12 hours or more a day every day.

The wear and tear stress does to the body is no joke. That, coupled with his age and driving, meant he was getting fatigued a lot. He even tried to drive through having shingles because if he wasn’t driving, he wasn’t making money. Seeing my dad hustle so hard meant I needed to up my side-hustling and freelance work and start designating that extra money strictly to the ‘Dad Fund’ so he could rest without worrying about money.

While pursuing YouTube one night this past summer, he came across a truckers channel, and that was it. He was going to become a trucker. It would eliminate 99% of his overhead and allow him to put nearly all of his income into savings and retirement. Considering no traditional job offer had happened since the start of the pandemic, this was a hail mary play.

That coincided with when my grandmother decided to rear her ugly head again, and this time it cost me $4,500.

The Big Emergency Fund Drain of 2021

My dads’ credit had tanked due to the pandemic, meaning he didn’t qualify as a leaseholder on the apartment my grandmother had convinced him to move into. He was only listed as a tenant, and my grandmother was the leaseholder.

Seven months after she left, my grandmother reached out to my dad asking for money to buy a car, fully knowing my dad didn’t have that kind of money. When my dad said no, my grandmother called the apartment complex to say she’d moved out and wanted her security deposit, knowing the position it would put my dad in. Because of the leaseholder situation, my dad now had a week to prepare qualifying documents and a new security deposit on the apartment or move.

He didn’t have the income or credit needed to qualify to stay. I didn’t make the income requirements to co-sign by far. He was facing being homeless. I didn’t even hesitate. I called the apartment complex and said I would pay the remaining three months of the lease as long as he got to stay in the apartment. It wiped out all the progress I had made in my emergency fund so far for the year.

We’re Not Out of the Woods Yet

Trucking is a lot harder than people think. Not only are you driving an 80,000-ton truck, but you have to drive through all weather conditions on roads and passes that haven’t been maintained in decades on top of an ever-changing sleep schedule due to delivery times. A month into my dad’s CDL training program, he was cut due to safety issues exposed while driving in the rain and snow at night. He was on his own to find a way back to Vegas.

I had to dip into my emergency fund again to cover a hotel until we could figure out what to do. One week and another $700 later, my dad is in Phoenix, staying with one of my aunties while he looks for jobs in a hopefully more lucrative job market. That doesn’t mean I haven’t stopped getting a contingency plan in place.

To quote Sinatra, that’s life. Sometimes people just get in the weeds, and it takes months or years to get back out. Making decisions when things like housing or food security are on the line is challenging, and sometimes you get it wrong. Add in the factors like age, costs of living increasing, housing inflation, and everything else exacerbated by this pandemic. People are forced to walk a very thin tight rope to survive.

My dad isn’t the only one this is happening to. Millions of people fell through the cracks, and it wasn’t because they were lazy. It’s because our social safety nets were ill-equipped to handle actually being a safety net. It’s because corporations saw low-interest rates as an easy way to pad their portfolios with real estate and to hell with the repercussions of inflating the housing market. It’s because the job market sees age and experience as a liability and drain on their bottom line.

All this combined doesn’t just impact those looking for jobs or places to live. It ripples out to people like me. People who are just trying to do what they can to keep their loved ones afloat while also trying to carve out a stable life for themselves. 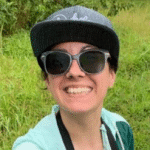 Mackenzie started her site, Life at 23k, to offer realistic and shame-free money advice to low-income and underemployed workers, who are often left out of traditional financial spaces. Her site offers tips on how to budget, save, invest, and break money taboos all while making minimum wage. You can find more on her website, Lifeat23K.com, Instagram, and Twitter.

4 thoughts on “My Emergency Fund Isn’t Just For Me; a Pandemic Tale”