It should go without saying, this post comes with a trigger warning around abortion, late-term abortion and child loss. It is bold and blunt, and mildly graphic.

Because the conversations around abortion are not nuanced like they should be in this country, it’s important to read this. You rarely hear the stories of people who think every day about the worst possible decision they could have to make… that they fully stand by as the RIGHT decision to have made.

There is an ongoing attack on childbearing people coming out of certain areas of this country. That we have managed to slip back nearly 50 years in time and are revisiting Roe V. Wade is horrific.

Tomorrow, the Supreme Court of the United States of America will hear a challenge to this landmark case that gave reproductive rights to women in America. Rights which, as you’ll see in the essay below, still constitute emotional and financial abuse of the women who must exercise those rights, in many cases.

Earlier in the year, Texas severely access to abortions in the state while pitting citizens against each other as enforcers of the law. With the extreme restrictions in place, abortions are practically impossible for many women.

Here at Women’s Personal Finance, we believe in the right to choose to have a child, whatever the reason. And we believe that reproductive health is part of healthcare. It does not stand alone.

We also maintain a small fund, from the donations of our community, to help support those in need of reproductive health care. And we have a large community to leverage if you’re in need of help. Please reach out if you need help.

Seven years ago today, I walked past protestors into a nondescript abortion clinic in a nondescript medical building in Arizona. I was almost 23 weeks pregnant, and the cutoff time was at 24 weeks.

At my 20-week anatomy scan, we had found out that my daughter had a condition known as Hypoplastic Left Heart Syndrome (HLHS), where the left chambers of her heart did not form properly. HLHS is not an immediately fatal condition on its own. Some babies survive by either a heart transplant or a series of three surgeries, the first at three days old. Unfortunately, after a whirlwind of meeting with specialists for the previous two weeks, we had learned that she would not be a candidate for the surgeries because of the other issues that were also present, and she would not survive long enough to wait for a transplant. The options presented to us were palliative care, if she made it through birth, or, termination.

At first, termination had not been discussed as an option between my husband and me. I am staunchly pro-choice, but I very much wanted my child and was prepared to care for her through any means necessary. As we met with various specialists, we were also researching which hospitals and doctors all across the country provided the best opportunity for her to survive and then thrive. However, after learning that she would not be a candidate for surgery, the definition of what it meant to care for her changed.

Palliative care, in our situation, was given as an option to keep her comfortable until she died after birth, assuming she didn’t pass in utero or during the birth itself. The description the doctor and the care nurse gave about that process was both kind and brutally honest. Termination was also presented in a way that was both kind and brutally honest. On Veterans Day, in that doctor’s office, was the first time that we really, deeply understood that we would not be bringing this child home.

We talked with my doctor again. We talked with all of our parents. We talked with our pastor. We prayed. We cried. I screamed in the car at the top of my lungs. And ultimately, we decided that termination was the most merciful option.

Because of how far along I was, in Arizona, I could not go to a hospital. I was given a choice between two abortion clinics or the option to travel out of state. I chose one about 30 minutes from my house because it was the closest. I was 22 weeks and five days pregnant, just nine days shy of not being able to stay in AZ.

The first day at the clinic was brutal. In Arizona, there is a mandatory 24 hour waiting period before beginning the actual procedure. They “educate” you on adoption and force you to go through an ultrasound to confirm how far along you are. To be clear, these are the state rules – the clinic just has to abide by them. Also, to prove you are not being forced or coerced, you are not allowed to have your partner with you at any point in the process. I laid there on the table in this nondescript taupe room in this nondescript building, watching my very loved daughter dancing around for what would be the last time. After five painful minutes that felt like an eternity, I was able to head out to the waiting room, grab my husband’s hand, and head home with a set of instructions on what we needed to do tomorrow when we returned.

We woke up early on November 19 and headed back to the clinic, again past the protestors. We filled out the paperwork, including the application for a death certificate since I was past 20 weeks, and it would officially be considered a “stillbirth.” I filled in her name while tears streamed down my face and my husband paid. It was $5000 out of pocket, and it had to be paid upfront. We put it on a credit card because insurance wouldn’t cover it, and we didn’t have the savings for it at that time. After too long in the waiting room, it was my turn.

The procedure is called dilation and evacuation, similar to the dilation and curettage used for an incomplete miscarriage. It’s a 2-3 day process, depending on how your body responds. The doctor started by explaining to me how everything was going to work and reminding me that if I started the process, I would have to remain under the clinic’s care (though I could go home between steps) because a hospital would not care for me. After I agreed, he began. A caring nurse held my hand while they did yet another ultrasound, this time because they needed to guide a very long needle into my belly, containing a medication that would stop her heart. I watched the screen until the flickers of her heartbeat and her dancing stopped. I still see this moment in my nightmares.

After that, the doctor inserted laminaria into my cervix to start the dilation process. They used a numbing medication, but it did not give much relief. Then, I was given a prescription for medication to help induce labor, told that a heating pad and ibuprofen would be my best comforts, and given instructions on what to look out for that would necessitate a call to their emergency line. They told me to go home and rest and then come back tomorrow, where we would then check on the dilation to see if more laminaria were needed.

I left past the protestors to go home with my husband, who again had to sit in the waiting room the entire time. My older child was with my parents, but they stopped by to check on me and give me hugs. Hubs and I binge-watched a show that I had wanted to watch and ended up loving, but I can’t bring myself to watch it again. The medication meant to help bring on labor definitely worked, and I sat on the couch with my ibuprofen and my heating pad, the only movement in my belly being the cramping that I was experiencing rather than the kicks and flutters I had become accustomed to. I slept fitfully.

The following day, we were not meant to go into the clinic until later, but the amount of blood necessitated a call to the emergency line in the morning. They told me to come in earlier to get checked out. It ended up being a normal amount of blood, but my water had broken overnight, so it looked much worse than it really was.

Since I was already there, the doctor checked my cervix and declared that I would not need an additional round of laminaria, and we could do the second part of the procedure. They confirmed that I wanted footprints and, if possible, handprints, and which funeral home I was using for her cremation. Then, I was given twilight anesthesia, rather than general anesthesia, which is supposed to make it so that you are awake, but you don’t remember. However, it did not work. For the next ten painful minutes, I was aware of everything that was happening. I stared out the window at the Tutor Time daycare across the parking lot while the same nurse from the day before held my hand again and tried to tell me that it would be okay. Then, it was over.

I got moved to a recliner to recover for 30 minutes before I could go home. There were four other women with me. Some tried to make small talk. Everyone had a different reason for being there. One had four kids already. One had found out about a DiGeorge’s diagnosis. Two had just not been ready. After 30 minutes, I was released back into the arms of my husband, who took me home, again past the protestors with their signs telling me I was a murderer. I felt empty.

After a couple of days, we met with the funeral home. We paid the fee for the cremation, $750, an insult to injury. We had to pick out what would be an urn, but they reminded us that it would need to be tiny because there would be such a small amount of ashes. Ultimately, I found a jewelry box that I could glue shut.

It’s now seven years later, and the jewelry box sits on my shelf on top of a small box containing her handprints and footprints, and ultrasound photos. I still think of her every day, and I have never once regretted being in pain, so she didn’t have to. The only regrets I have are not of my making. Such as my regret for the system that makes abortion inaccessible and cold. Or my regret for the fact that my husband could not hold my hand through some of the moments where I really could have used it, or the fact that I was privileged enough to be able to pay for it at all since insurance wouldn’t cover it.

As Roe v Wade makes its way back into the Supreme Court and access to abortion is threatened in many states, voices like mine get drowned out in the narrative. You hear the stories of the mothers who regret their choice forever and the infamous late-term abortion false stories, but you don’t hear much from people like me who stand firm in the conviction that I made the right choice. This is my story. This is what real late-term abortion looks like. This is my daughter. 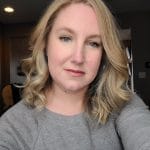 I have been in the financial services industry since 2004, where I started right out of high school. I realized pretty early on that I didn’t know a lot about money, and I realized not much later that a lot of others didn’t either.

I became a student of personal finance and read as much information as I could on how to handle your money. I wasn’t perfect, and I made a few mistakes, but I loved to learn, and I really loved to help people learn with me.

9 thoughts on “My Heartbreaking, and Unquestionably Right, Late-Term Abortion”