When Darcy originally wrote this post for Women’s Personal Finance, Roe v. Wade had not yet been overturned. Perhaps the alternative timeline below would have felt more farfetched. But in the time since the Dobbs decision was finalized and the Supreme Court ruled that women are again officially second-class citizens here in the United States, the alternate timeline doesn’t feel as distant as it should.

Perhaps the idea of us being second-class citizens still feels like hyperbole, especially if you live in a state where your rights are still protected. But for too many, this is now a reality. For Texas women and people with uteruses, it’s been a reality for the better part of a year. And if you look to the future, it’s not looking so great. We may still be far ahead of the times when women were literally chattel property, but it took a lot of fight to make that change. And it will take a lot of fighting to keep us from returning there.

With that, let’s pass the rest of this post on to Darcy from We Want Guac, and let’s consider what life might be like if history looked different for women.

What If History Looked Different for Women? And What Does Our Financial Future Look Like?

One of my biggest interests is in learning about history. The past is this monolith of complexity so layered and convoluted that it’s a wonder we can manage to drive any simple narrative from it. Think of yesteryear as a big pillar with hieroglyphics. If you go closer to the dark gray slate and peer at the intricate designs, you’ll quickly spot little sentences wrapped in between and throughout each line of art. Run a finger along the engravings – notice how even the smallest markings are interconnected with the rest as a whole, like the smallest root of a mother tree? That’s history. Sometimes it can seem like nothing more than chaos with the sheer number of actors and events taking place. But that pillar doesn’t show randomness – everything builds up to the top of it, where today’s reality currently stands.

That history has shaped every facet of our world today. And as incredible as that is, what really blows my mind is when I pause and look beyond all that: the pillars of alternate histories, where something was different and forever altered the rest that came after it. These are just as exciting to read and explore; history often repeats itself, after all, and considering the “what-ifs” are just as entertaining as they are educational (just look at Bridgerton or The Man in the High Castle to see what I mean).

There’s one pillar, in particular, I’ve thought about in the past, one that sits uncomfortably close to ours in this landscape of time.

If I direct you to check out that pillar of alternate history, you’ll see your life played out in a very different way. Since you’re reading Women’s Personal Finance, you’re already taking the necessary steps to achieve wealth and stability. This is the story of who you are if we stood on that other pillar instead of this one. If the last decades and century of women’s rights hadn’t moved forward (until the wall we’ve hit in this decade).

Consider this alternate history: You live in the United States, where you are legally barred from pursuing financial wellness. Unless your parents are already rich and powerful, you are automatically not in control of your financial fate. If there is a particular career you want to pursue, like practicing law or inventing a software platform, you may not be allowed to get your license or patent your product. In fact, in many parts of the country, there are specific laws on the books saying authorities can prevent you from specific jobs, if they so decree.

Going into the trades? That’s likely also to be closed off to you because of false perceptions you’re not cut out for it. Assuming you find work that’s “okay” for you to do – which is rarely lucrative – you may not have a say in where your post-tax dollars go. That is decided by someone else, who may or may not have your best interests at heart. We’ll call them “Boss.” If you’re lucky, Boss cares about your opinions about money and will work with you on doing what you want with your money. But in American culture, it’s disturbingly likely that Boss will not. Often, Boss will do what they want to do with your money, and you don’t have the social or legal recourse to fix it.

If you want a raise, you can, of course, see the market rate for your job title on Glassdoor. But employers don’t care about that. They won’t care if you bring it up. They know they can keep you at the same rate with little – if any – consequence. Where else could you go? Too few employers are around to hire someone like you, anyway. Besides, if it’s REALLY that much of an issue, your employers can just change your job title to shut you up.

Medical conditions, even relatively mild ones, are all businesses need to dismiss you from your job. Wouldn’t matter if some wildly high number of people – say, 86% of people like you – also deal with this medical condition. Nope, don’t mean a thing, just pack up your belongings and get walked out the door. We don’t do that socialist nonsense of “reasonable accommodations” or “solidarity.” (The Pregnancy Discrimination Act was passed in 1978. Before then, women were regularly fired from their jobs upon becoming pregnant)

“Screw this!” you might cry. “I’ll just open my own damn business!”

Again, you can try. But you’ll need money to do that, which means taking out a loan or line of credit. Which, hon, you’re not allowed to do on your own. It doesn’t matter if you’re the safest loanee ever – banks will automatically reject you unless you can find someone else to cosign with you. (The Equal Credit Opportunity Act, signed in 1974, required that banks allow women to take out loans – including mortgages and credit cards – on their own)

You’ve got expectations to do certain work that treads painfully close to demands. If you no longer live with your family, money has traded hands to put you elsewhere. And you’re not allowed to do much unless it’s with permission from Boss. Did I mention they’re the one in charge of where you live?

Want to Own Something? Anything?

This would be a worry if you ever considered investing in real estate. You may want to be a homeowner someday, but you can’t – the law says you’re not allowed to. That’s right; you are barred from owning any buildings, land, gardens, outhouses, or a simple lean-to down by the river. Again, Boss comes into play as your only possible lifeline for achieving this. You’re wholly at Boss’s mercy because the laws don’t have your back.

And if you want to change these laws? Good luck… because you may be a citizen, but you’re not allowed to vote. (19th Amendment, ratified August 18, 1920, for white women. For Black women, that wasn’t until the Voting Rights Act of 1965…just 50 years ago).

That voting line may have clued you in on who “you” are in this story: you’re an American woman living in an alternate timeline, a timeline in which over two hundred years of equal rights wins never happened.

Without several victories and struggles for equality, I wouldn’t have been able to work towards financial independence in the way I’m doing it now. If I had my heart set on riches, my only hope would be through a strategic marriage – which, given my #girlboss personality and stubbornness, would have made me an unlikely/undesirable candidate.

Nobody gets here alone, and I have history to thank for the position I’m in today. None of these people were specifically doing this in the name of Darcy, but I still benefit outrageously from their continued efforts to give me what others already have. Without them, I couldn’t buy a house one day or even sign my current lease on my own. Nothing would really be mine, including the fruits of my own labor.

A Funhouse Mirror of History

Here’s the rub. I look at this alternate pillar and compare it with ours. While there are abject, glaring differences, I see vast amounts of identical text. My life happens to be radically different, but that’s affected by my social capital in a world of prejudice. I’m white, straight-passing, well-educated, and able-bodied. Changing any one of these attributes would have made my life a lot worse on the other pillar. I didn’t even get into what your story is on the other pillar if you are both a woman (or perceived as one) and had one or more further “disadvantages” to boot.

That, combined with the utmost importance of money in a capitalist society, brings us to the inevitable link between women’s rights, women’s wealth, and women’s well-being.

We can glean many more layered meanings and understandings from the pillars. Here, the moral I want to highlight is the one of progress. While there is so much more work to be done for all women to be equal, we’ve already come far in our victories around money.

The act of learning about financial management is a radical act of progress in and of itself.

Starring You: The Subject and the Sculptor

As a woman, financial literacy is one of the most crucial tools at your disposal. You’re not just achieving your own goals and dreams through financial stability; you are also paving the way for the others coming after you. The others you don’t even know and will never meet will see your progress and find inspiration in your work towards a better life. They are the others who will, one day, stand atop a higher pillar and gaze down at the carvings your life has left behind.

Keep carving away. We’ve got the chisels you need to fill an empty space on this pillar. Whatever your life holds, it was made better thanks to the ones who came before.

What Does This Mean For Our Future?

The year is 2022. So many of our rights as women and nonbinary folks are in question right now. The Dobbs decision. The “Don’t Say Gay” legislation in Florida. Families of transgender children getting torn apart in Texas – and other states. While we may have been lulled into complacency in the past that “the arc of history bends towards justice,” we must remember that it doesn’t bend on its own. Our rights aren’t set in stone forever. And if we continue to sit by and believe that things won’t get worse, they will. The last half decade has shown us that, and we’d better start believing it.

As Darcy says above, controlling your financial life is a radical act of progress. And while legally, we can own our own money and bank accounts, too many of us don’t. It only takes a week in the WPF Facebook group to read too many stories about women who trusted their finances to a male partner, only to have it crumble on them. We have the right to control our financial future – but we still have to fight against the cultural norm that tells us to do otherwise. 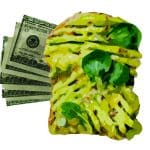 Darcy graduated college without a job and, three years later, reached her $100,000 milestone. She blogs at We Want Guac to help Gen Z better understand how to earn more money and what you should do with it. Coupling a high income with low expenses is the ticket to financial freedom, making the path to wealth take place while in your 20s. You can best reach out to her at darcywantsguac@gmail.com